Founded in 2019, Squash at Ox Ridge has quickly become one of the leading squash clubs in Fairfield County, Connecticut.  Operating as a private social and athletic membership club, Ox Ridge focuses on developing players of all levels to their full potential through individualized attention and a comprehensive service offering of clinics, private lessons, intra- and inter-club competition and round robins.

Ox Ridge possess one of the newest squash facilities on the East Coast with: 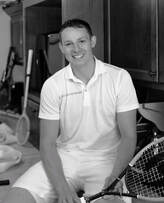 Will Newnham is the Head Pro at Ox Ridge.  As a youth, Will grew up playing in some of the most storied and historic clubs in England with legends in the sport.  As a player, Will was a top-five British junior, an All-American on the #3 ranked University of Rochester Varsity squash team, and a professional on the world tour.  As a coach, Will has coached several nationally ranked juniors throughout his career.  Prior to joining Ox Ridge, Will was an assistant pro with the Racquet & Tennis Club of NYC, one of the leading squash clubs in the United States.
Will can be reached at will@oxridge.com.

​Rodney Martin joined Ox Ridge in 2021 to focus on the development of  Ox Ridge's Elite Tournament program (a program for nationally ranked, junior players).  Rod is a legendary player and coach whose career spans over 30 years.  As a player, Rod won the World Open in 1991 (the most prestigious title in squash) defeating Jahangir Khan and Jansher Khan.  He was also a three-time British Open finalist. As as coach, Rod has worked with numerous champions over two decades through Rodney Martin Squash (RMS).  Rod is currently the coach to the world's top professionals, Mohamed El Shorbagy (Highest World Ranking or "HWR" #1) and Nouran Gohar (HWR #1).
​Rod can be reached at rodmartin@oxridge.com.​

R​yan Cuskelly joined Ox Ridge in 2021.  Ryan was formerly with Chelsea Piers, Stamford, as part of the RMS team. As a player, Ryan has won major titles such as the Motor City Open and the Bluenose Classic.  Ryan held the Australian #1 rank for 5 years and reached an HWR of #12 prior to his retirement from singles in 2020. Ryan has continued his professional career and is currently a highly ranked doubles player.  As a coach, Ryan has worked with players in and around Fairfield county for the past 13 years.
​Ryan can be reached at ryan@oxridge.com.

Farid Khan joined Ox Ridge in 2021. Farid has coached in Fairfield County since 2011, helping many junior players achieve success at the national level. Many of Farid’s students have gone on to play squash in the Ivy League and Farid's son, Faraz, is currently ranked #53 the professional tour.  Farid was previously the Head Squash Professional at Eastern Athletic Club before moving to Fairfield County.
*All information on this website is subject to change, including membership information